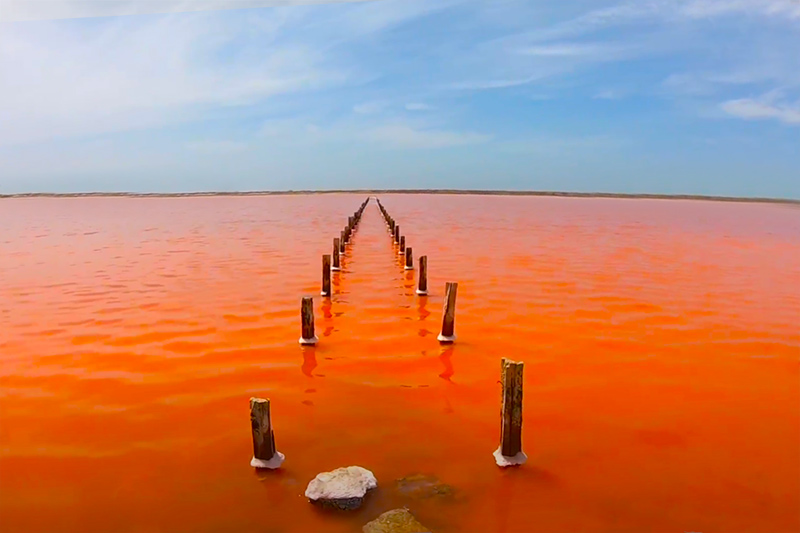 You’ve heard of the Black Sea, the Red Sea, and maybe even the Dead Sea but have you ever heard of the Pink Sea? Most people haven’t. In fact, it’s one of the best-kept secrets in Cartagena.

Just an hour’s ride from the center of the city, there’s an amazing spectacle that vacationers (especially those with a photographic eye) can take full advantage of—the Pink Sea of Cartagena. Called El Salar de Galerazamba by the locals, this body of water turns an amazing shade of pink during the months of February and March.

The pink shows in such stark contrast to the “normal” blue body of water across the nearby road, that the little Pink Sea seems almost magical.

The Biology Behind the Pink Sea

But what causes this body of water to turn such a special shade of pink? Microbes! The Pink Sea is actually a part of an authentic sea salt mine that’s been in operation for decades—perhaps even centuries. Local harvesters use the shallow pool to collect sea salt as the water’s dry up.

Interestingly though, there’s a special class of microorganisms that live in this particular pool that normally go unnoticed. They go about their lives for ten months out of the year completely inconspicuously. It’s only in the months of December through April—when the water levels of The Pink Sea are at their lowest—that they make themselves known in such a spectacular way.

Indeed, these little microbes—actually a type of algae—make a pink pigment—beta carotene, like in carrots—that lets them absorb healthy energy from the sun. But normally, they’re spread so thin that the pigment isn’t visible to the naked eye. When the water levels drop, the concentration of these microbes becomes so high that it effectively turns this salt mine a bright shade of pink!

(Sometimes you can also get a hint of the phenomenon around August and September but the color is not usually as bright or spectacular as it is in the first few months of the year.)

This route has tolls

This route has tolls

There are a few things people vacationing in Cartagena should know about visiting The Pink Sea of Cartagena before they go.
First, the mine is actually about an hour’s ride north and east of the center of the city. So you may want to pair a visit to the Pink Sea of Cartagena with another excursion in that direction to make a full day trip out of it.

Second, you can walk in the amazing pink waters all you want—it’s open to the public. However, because of the high salt concentration, it’s recommended that you bring some type of protective footwear as the crystals can sometimes be a little abrasive.

Third, you can get there by bus (for about 22,000 Colombian Pesos or $7 USD) and motorcycle taxi the last leg of the journey (ten minutes or so), or take a taxi directly from Cartagena but when you take the public transportation outside Cartagena’s city center, you run the same risks as you do using public transport anywhere.

While the Pink Sea is beautiful, you don’t want to end up spending the night on the shore because you missed the last bus south.

(Don’t like relying on public transportation? When you stay at one of our luxury vacation rental homes in Cartagena, we can hire a private car and driver to take you and your fellow travelers to The Pink Sea and back again.)

Imagine the vacation photos you can take with a bright pinks sea as a backdrop! Make your friends and Instagram followers green with envy (pardon the pun) when you visit Cartagena’s secret Pink Sea.