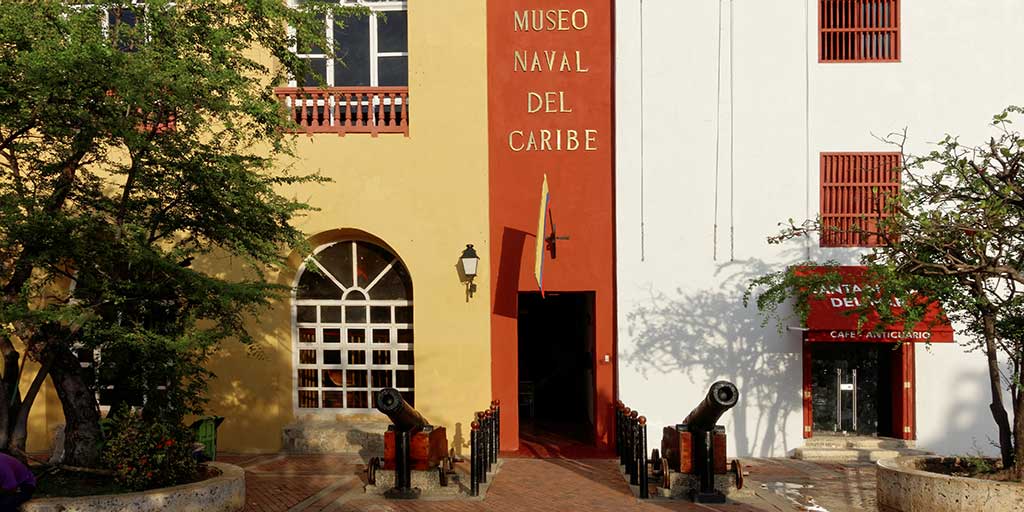 The Naval Museum of the Caribbean in Cartagena

Spanish armadas clashing with their English counterparts, pirates and privateers, lost treasures and the sad stories of millions of African slaves—it’s hard to find a single body of water that has a more storied past than the Caribbean Sea. Preserving that history and showcasing it to the world is the mission of the Naval Museum Cartagena.

Officially open in 1992 (on the 500th anniversary of Columbus’s “discovery” of the New World) the Naval Museum of the Caribbean in Cartagena de Indias was created to showcase the rich and important history of the Caribbean Sea. Not only was this body of water instrumental in the growth of the New World, it funneled billions of dollars’ worth of raw goods (gold, cash crops, gemstones, etc.) into Europe and the Americas. In short, the rich naval history of the region essentially shaped the modern world we live in today.

Located in the center of the old Walled City between the Bastion of San Francisco Javier and the Church of San Pedro Claver, the museum sits inside a Colonial-Era structure that was once home to a Jesuit college. Today it houses a massive collection models—both of cityscapes and naval vessels—maps, and a considerable display of artifacts that help transport visitors back through history. The mission of the museum is so important that many municipalities throughout the Caribbean have donated historical artifacts to the museum.

About the Naval Museum Cartagena

Though the museum was opened in 1992, its birth goes all the way back to the early 1980s. Several history-minded groups (including the Jesuit order and the Colombian Navy) came up with the basic proposal for the museum. After going through a lengthy approval process, the project was officially given the “OK” in 1986.

The building itself is split into two football-field-sized wings on the second floor of the structure separated by open air patios. The West Wing (called the Colonial Wing) is dedicated to the Spanish Colonial era in the Caribbean. This wing was once home to the first school created by the American Society of Jesuits and is now home to some of the oldest artifacts in the collection.

The East Wing (which was once used as a barracks for the newly formed Colombia Marines) is devoted to the Colombian Navy. The displays, documents, and artifacts (including de-milled torpedoes) here follow the development of this defense force right through modern times.

The Naval Museum Cartagena is open Tuesday through Sunday 10 AM to 5:30 PM in the off season and Monday through Sunday 10 AM to 8 PM during the peak season. There is a small entrance fee (6,000 Colombian Pesos—roughly $2 US) and guided tours are available for about $12 US. One caveat: most (if not all) of the text inside the museum is in Spanish. If you don’t speak or read the language, consider opting for a guided tour in your native language.