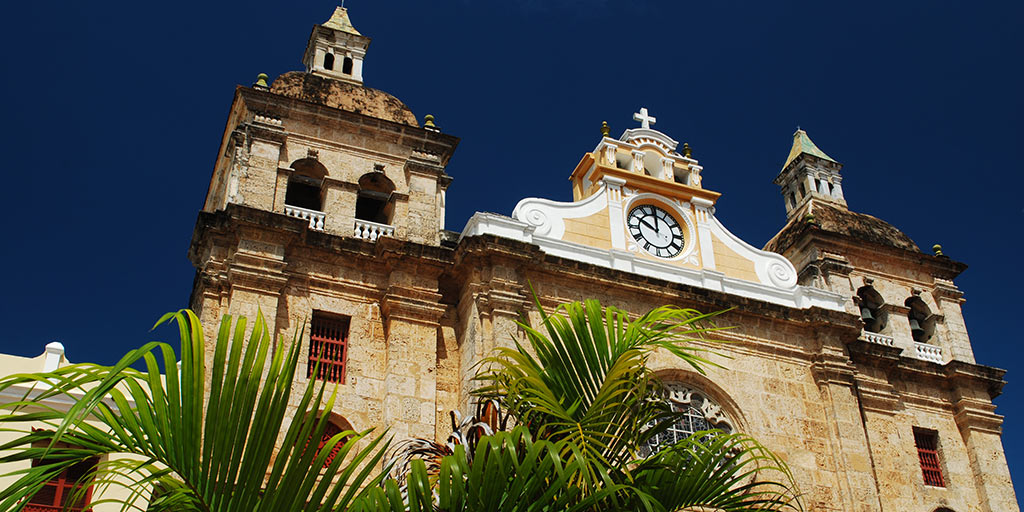 The Iglesia de San Pedro Claver (or the Cathedral of Saint Peter Claver) is an ornate Catholic church in the heart of Cartagena’s historic old Walled City. The building is dedicated to a 17th century Spanish priest (later elevated to sainthood) who gave his life to the service of God and those in need.

The building itself features beautiful Spanish architecture, magnificent statuary (including the ornate marble altar at the heart of the church), and hand-crafted stained glass that catches the tropical sunshine like the colorful gemstones that Colombia is known for. Locals and visitors alike often come to the church seeking a bit of quiet solitude for personal reflection and prayer and can view the earthly remains of Peter Claver which lie in state behind glass under an alter in the church.

Just steps from the Plaza de la Aduana, the church was built between 1580 and 1654. Originally known as the Church of San Juan de Dios, the cathedral was later renamed the church of San Ignacio de Loyola before being given the name that we know it by today.

The cathedral was declared a national monument in 1995 and is an important national heritage site for Catholics and Colombians alike.

The Man Behind the Name

Pedro Claver was born in Verdú Spain on June 26, 1580. He was educated at the University of Barcelona where, at a young age, he decided to dedicate his life to God. He travelled to Colombia in 1610 and studied under a number of revered Jesuits until 1616 when he himself was ordained. His tutelage under Father Alonso de Sandoval (who himself ministered to slaves for forty years) dramatically shaped his outlook on the slave trade—one of the most lucrative industries in the Spanish colonies.

Claver saw the captive Africans not as chattel but as fellow Christians in need of charity, kindness, and care. He would often go to the harbor—where 10,000 captured Africans were “imported” every year—and be the first to enter slave ships as they arrived. Later, he would visit the slave pens and do what he could to ease the suffering of the kidnapped slaves. He offered medicine, food, and the blessing of God. In Fact, Claver is said to have personally baptized 3,000 slaves in Cartagena.