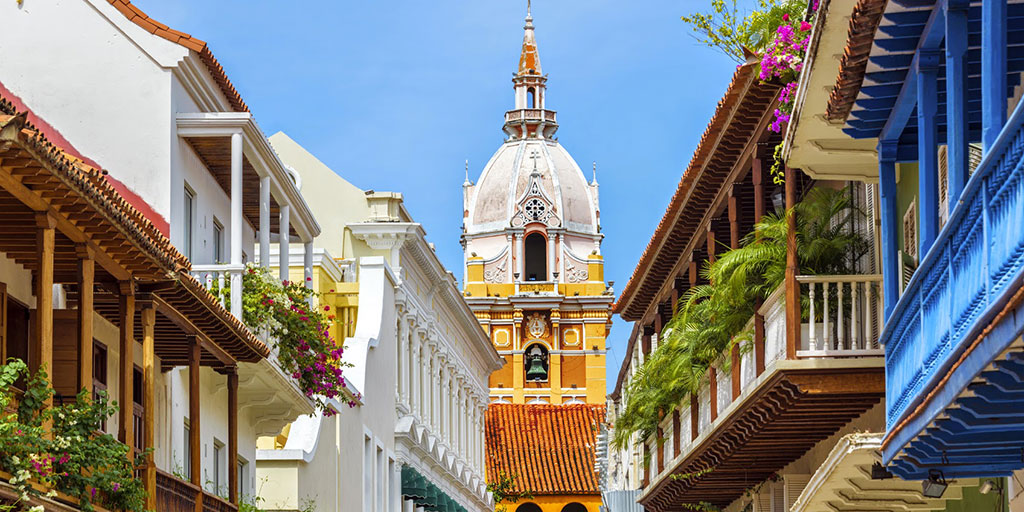 Officially designated as Metropolitan Cathedral Basilica of St. Catherine of Alexandria, this outstanding 16th century cathedral is more commonly referred to as the Cathedral of Cartagena (la Catedral de Cartagena). In a city crowded with beautiful buildings, this one stands out with brilliant yellow walls and a domed tower that stretches high into the bright blue sky—a dome which can be seen from most anywhere in the city center and is a helpful landmark for those navigating Cartagena by foot.

Located at the corner of the historic Plaza de Bolivar in Cartagena, the cathedral is central to Cartagena and on your way no matter where you are going. The Cathedral, though hundreds of year’s old, is still the see of the Archbishop of Cartagena de Indias—one of the oldest bishoprics in the New World.

The building itself was declared a National Monument in 1995.

The Cathedral of Cartagena’s History

The Cathedral of Cartagena was the dream child of Pedro Fernandez de Busto—governor of Cartagena—who wanted a centralized place of worship for his more modern city. Construction began in 1577 but didn’t end for another 50 years.

Long before the Catedral de Cartagena was complete, the famous privateer Sir Francis Drake laid siege to the town of Cartagena in 1585. When the locals refused to pay the ransom he demanded to free the town, he fired a “warning” shot into the cathedral. The cannonball hit one of the support columns dead on, causing a partial collapse and a tremendous amount of damage. In spite of Drake’s temper tantrum, craftsman rebuilt after Drake had moved on.

Since then, la Catedral de Cartagena has undergone multiple renovations, none more controversial than that orchestrated by French architect Gaston Lelarge in the early 20th century. In many people’s eyes Lelarge’s work (false ceilings and gaudy murals,) was an eyesore. The church eventually ordered the removal of most of Lelarge’s work (though his domed tower still stands.)
In the late 1970’s the cathedral was completely refurbished and brought as close to its original glory as the National Monument has been in centuries.

When modern travelers step inside they’re greeted by delicate archways that soar high above marble floors, giving the Catedral de Cartagena an airy and open feel. The gilded altar (dating from the 18th century) is an amazing piece of hand carved sculpture and statuary which sits in a place of honor atop the Carrera marble pulpit. Intricate galleries to the sides offer additional inspiration for the devoted and photographers alike, featuring statuary and paintings dating back hundreds of years.

Because it’s centrally located to many of the other must-sees in Cartagena, the Catedral de Cartagena makes a wonderful place to escape the heat of the Caribbean sun during your tour of the city. Collect your thoughts as you gaze upon centuries of handcrafted artwork—including the building itself!