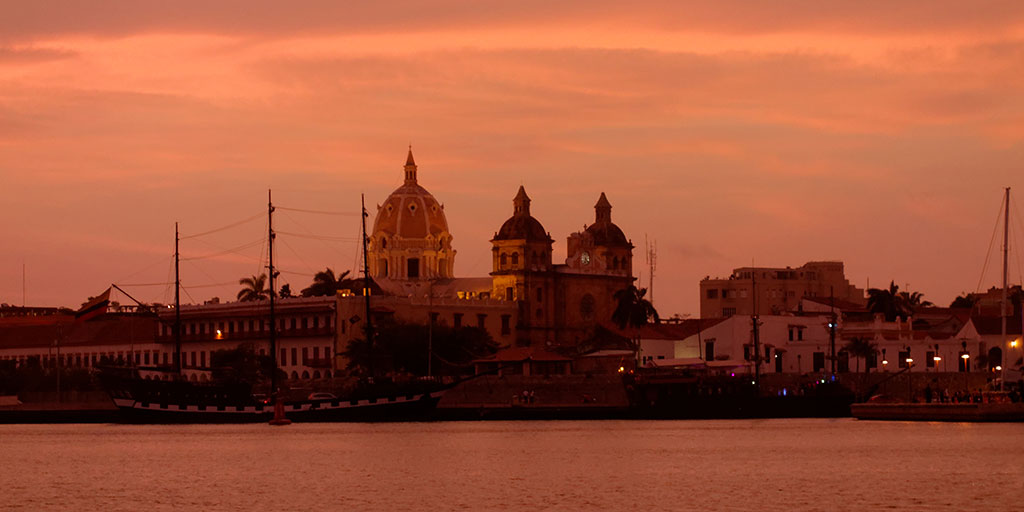 Of all the Catholic churches and cathedrals in Cartagena, the Iglesia de Santo Domingo is one of the most breathtaking. Not only is it the oldest Catholic church in Cartagena, it also contains some of the most beautiful hand-carved religious statuary in the city. But before the church became a cool retreat in which weary travelers could rest and gather their thoughts before heading back to explore Cartagena’s Walled City, the Iglesia de Santo Domingo led an exciting and storied life.

Construction on the original structure began in 1539 in the Plaza de los Coches. Originally attached to the convent of San Isidoro, a branch of the Dominican order in Colombia, the church only stood for 13 years before a massive fire which consumed most of Cartagena burned it to the ground.

The Church was rebuilt in 1552 on the Plaza Santo Domingo, where it sits today—but that’s not the end of the story.

The most eye-catching architectural aspects of the church are the massive buttresses designed to support the heavy roof. These were in fact an afterthought. The original rebuilt structure began to crumble under its own weight shortly after it was completed and the buttresses were hastily constructed to keep the roof from raining down. Thankfully, the last-ditch effort worked. The Iglesia de Santo Domingo has stood solid in the heart of Cartagena ever since—even if the bell tower is “distinctly crooked.”

During the last 460 some years the church has been attacked by privateer Sir Francis Drake (1586), has housed French troops (in 1823), was protected by the royal Spanish Armada (in 1875), and was badly damaged during the Civil War.

Though the years have been hard on it, the Iglesia de Santo Domingo in Cartagena was fully restored to its former glory in the 1970s. It now stands as a monument to the baroque architecture favored by the Catholic Church during the Spanish Colonial period.

The Beauty of the Iglesia de Santo Domingo in Cartagena

While the exterior is relatively plain (save for the ornate entrance) the intricate baroque stylings are ramped up in the interior. The lofty space if filled with gorgeous carvings on either side of the massive nave including a wooden statue of Christ resting serenely on the massive golden baroque altar.

Inside the church you’ll also find a number of tombstones dating as far back as the 19th century, a sobering counterpoint to the brilliant blue ceiling suspended overhead.

While the church is still functioning today and available for the faithful during mass, interested travelers can take a self-guided audio tour (offered in multiple languages) through at any time to get a deeper understanding of the structure’s history and its significance in Cartagena. It’s also a perfect place to sit in silent reverence and experience the awe-inspiring craftsmanship that’s withstood four centuries of natural disasters, pirate raids, and civil war.

This fully restored historical gem is a must-see for history buffs, the devout traveler, or anyone who simply enjoys gorgeous statuary lovingly carved by hand.