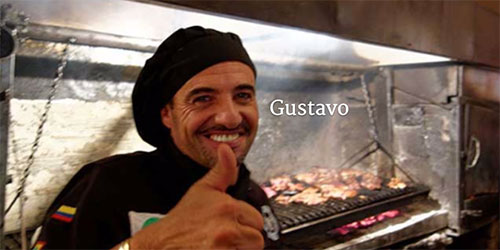 There is an abundance of A la Carte as well as traditional restaurants in Cartagena. The list is becoming an A list of Who’s Who in the restaurant world. It’s not only the famous that are flocking to Cartagena. Many Nationalities are making Cartagena their home. Just ask anyone in the old city for Gustavo who has successfully set up a piece of Argentina opposite the Santa Clara Hotel.

Meet Gustavo from the Marzola Restaurant in Cartagena

Go check it out at night and you will see why.

This is before you step up the stairs and meet Gustavo who is very hands on and if he’s not there to greet you, will be very likely behind the grill.

Not only is his smile contagious but his passion for the food and the atmosphere will leave you wanting to come back.

This is impressive considering Gustavo is not a Colombian but has made it his home, paving the way for many others to follow in his footsteps.