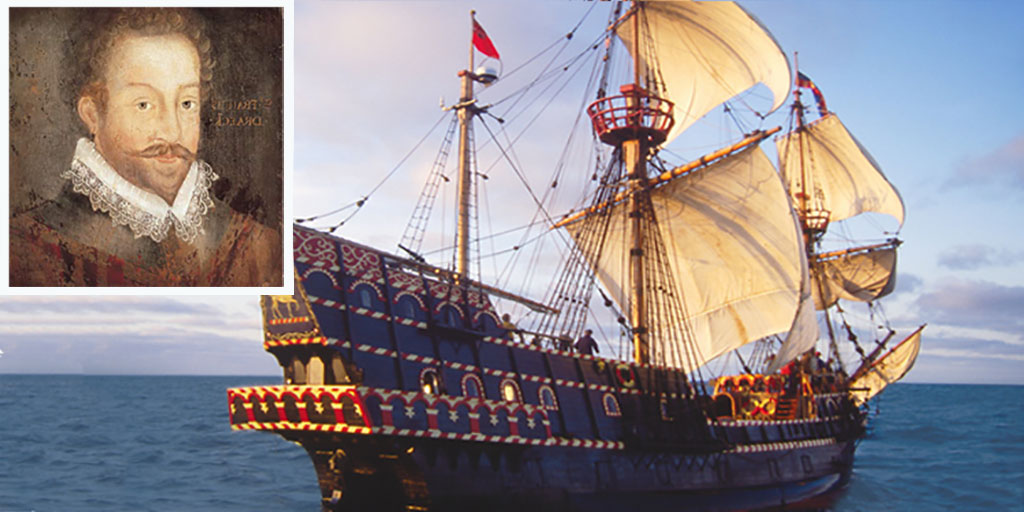 The fifteen hundreds were a contentious time in The New World with Spain and England butting heads in battles by proxy in places like Cartagena de Indias prior to declaring all-out war on each other. In this era privateers (officially licensed pirates) ruled the seas and sacked cities great and small from the coasts of Spain to Central and South America.
Cartagena, sitting pretty in the Caribbean on the edge of Colombia, was in the thick of it all! And one fateful February (1588) the famous “privateer” Sir Francis Drake would make an indelible mark on the city’s history, laying siege to it for months and leaving only when officials agreed to pay the equivalent of $34 million US Dollars.

The Man and the Myth

Born to a clergyman and his wife in or around 1540, Drake would go on to become one of the most famous explorers in history, setting the world record for global circumnavigation. He would also become one of the most feared (and fearsome) privateers ever to sail the seven seas. In fact, Drake became such an enemy of Spain that King Phillip put a price on his head—roughly $6.5 million in today’s US Dollars.

However, long before the Spanish bestowed Sir Francis Drake with the ferocious nickname of El Draque, Drake would grow up on the sea working a small barque and dreaming of riches beyond imagination.

This lust for glory was fanned into a raging fire when he accompanied his second cousin Sir John Hawkins (yet another privateer) to the New World when he was just 23. Hawkins and Drake were set upon by a Spanish fleet and were forced to abandon their vessels. Young Drake returned to England invigorated by his experience and used connections with the British Crown to rapidly elevate himself to command.

While Drake did many amazing things in his life (and a few distasteful ones such as trading in slaves and presiding over a political rival’s execution after accusing him of witchcraft) it is perhaps his Great Expedition that clinched his place in world history.

The Expedition was launched at the behest of Queen Elizabeth I in order to disrupt Spanish holdings in The New World. Drake left Plymouth, England in 1585 with 29 ships and 1,800 men. He would come back a millionaire and a war hero.

Drake’s first targets were Vigo, Spain and the island of Santiago. He laid siege to one and burned and plundered the other before setting his sights on fatter prizes in the Caribbean.

The fleet sailed across the Atlantic and captured Santo Domingo on New Year’s Day of 1586. By February 9th Drake’s fleet had been spotted off the coast of Cartagena de Indias.

Though many of the fortification modern visitors to Cartagena can see were built after Drake’s attack, the city was exceptionally well-defended from the sea before Drake set sail. Knowing this, he split his forces and attacked via Boca Grande while launching a diversion along the coast.
Even though Don Pedro Fernandez de Busto (governor of Cartagena de Indias) had been warned of the attack and had prepared the city as best he could, Drake captured Cartagena in less than a day. His occupation of Cartagena would last for over two months while he negotiated with city officials for a proper ransom. To motivate them, Drake burned over 200 buildings and fired cannon into Cartagena. Several of those cannon balls struck the Cartagena Cathedral and damaged (but did not destroy) this historic structure that still stands today.

In the end, Drake was given 107,000 ducats (roughly $34 million US Dollars) to free the city. He left in early April, just two days ahead of a Spanish fleet dispatched from Seville to trap him.

Visitors to modern Cartagena de Indias can still see some many of the defenses that were built to prevent future privateer raids and many of the Spanish Colonial buildings that were rebuilt after Drake sacked the city.

Drake’s Raid on Cartagena Gave Birth to the Mojito?

Interestingly enough, Drake and his crew are credited with inventing (or at least popularizing) the mojito. After the siege of Cartagena, several of his crew fell ill. Looking for a cure, he sent envoys ashore in Cuba to speak with the native peoples. His men came back with a drink made from a primitive form of rum, lime juice, and mint!

Drake would go on to be knighted, become a vice admiral in the Royal Navy, help defeat the Spanish Armada, and more. However, he met his end when he returned to the Caribbean and tried to recapture some of the glory he had basked in as a young man. After suffering one defeat after another, Drake tried unsuccessfully to capture San Juan Puerto Rico. He became ill and in 1596 Sir Francis Drake succumbed to dysentery and died aboard his ship off the coast of Panama.