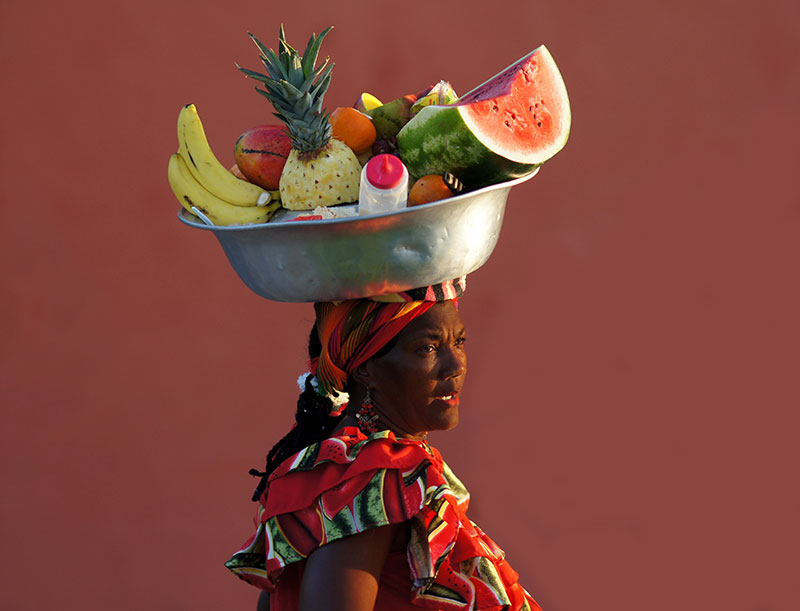 When you vacation in Cartagena, Colombia, one of the things you’ll no doubt see on pretty much any street corner is a brightly dressed woman selling fruit. These Palanquera fruit sellers have become iconic in the city offering some of the juiciest refreshment you’ll find on a hot Cartagena day. They graciously pose for photos with tourists (tipping for those photos is only polite) and smile while they offer their wares day and night. But these smiling women have a much more important place in the history of Cartagena—and Colombia as a whole—than as mere tourist attractions. Indeed, these Palenquera fruit sellers are a symbol of the strength of the human will, of the fight against oppression, and the resilience of the human spirit.

The History of the Palenques and Their Fruit Sellers

It’s no secret that in the Spanish Colonial Days, the Spanish slave trade in The New World funneled through Cartagena. In the beginning, native Colombians would be rounded up in the wilderness, harnessed into slavery, and shipped throughout the colonies in South and Central America and the Caribbean. In later years, those native Colombian slaves were replaced by Africans stolen from their families, their homeland, and their culture. These slaves were displayed, traded, and sold in the markets right in the heart of Cartagena. It’s these slave markets that San Pedro Claver would visit and these people to whom he would minister and heal.

This global tragedy is a part of European history that we simply can’t ignore.

But out of this tale of darkness, of hatred, of fear come some of the most empowering stories ever told. And one of those stories is the story of the Palenquera fruit sellers.
400 years ago there was a slave revolt in Cartagena with hundreds of captured Africans throwing off their chains and escaping into the wilderness surrounding Cartagena. These escaped slaves created strongholds in the jungle, created communities, created lives for themselves. It’s here in these havens—these palenques—that they embraced their African roots, practiced the traditions that had been stolen from them, and raised families.

Just 30 miles outside Cartagena, San Basilio de Palenque was created in 1713 and declared one of the first independent communities in The Americas. Through force of will, determination, skillful negotiation, and a little luck these original founders were able to stave off the Spanish and maintain an independent community in which they could practice their religion, embrace their culture, and revive their African roots.

And while many of those traditions were blended with Caribbean cultural contributions, these escaped slaves and the generations of free men and women they gave birth to still maintain a strong independent culture—including their own language: Palenque.

In order to survive in a hostile environment in which their very independence and freedom was challenged on a daily basis, these African peoples embraced trade as a way to earn a living, carve out a place for themselves within Cartagena, and maintain their community’s vibrant cultural life. The women from these outlying community’s brought fresh fruit and produce they harvested from the jungle to Cartagena each day and sold it for goods and currency they would then take back to their families.

What started as a meager subsistence trade quickly became an integral part of the economy and the cultural landscape in this melting pot that is Cartagena.
While there’s no historical record of exactly when the Palenquera fruit sellers came to Cartagena, these women have become one of the most iconic cultural stepstones of our beautiful city.

Their African features, Palenque language, and cultural beliefs remind us of dark times in the history of The New World. Their resilient spirits, bright smiles, and vibrant dresses show us that even in the face of extreme adversity that the human spirit can not only survive but thrive.

So, when you vacation in Cartagena and spot one of these brightly clothed women on the street, realize that you’re not just looking at a photo opportunity. You’re looking deep into the centuries of history that this iconic Caribbean city has built its modernity upon.

But don’t let that immensity keep you from trying the fruit. It’s a tasty and refreshing reminder that life in the Caribbean can truly be sweet.