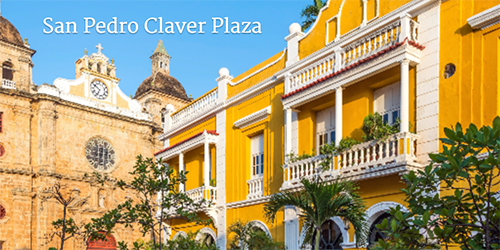 Cartagena’s rich history and heritage shines through in its beautiful architecture, which has become one of the main attributes of this charming Colombian town.

Located on the southern coast of the Caribbean Sea, Cartagena’s history dates back to the 16th Century when the city was a bustling hub of the Spanish empire. Playing the role of an inquisition center for the Catholic Church and a base for the slave market in South America and the Caribbean region, as well as being the region’s most shipping port between the New World and Spain, the city’s architecture is a beautifully preserved reflection of this once burgeoning city.

Most of the architecture from this time can be found in The Old City, now a UNESCO World Heritage Site, in which a maze of charming colonial churches, homes, plazas, and fortifications is protected by colossal stone walls that surround the city.

Cartagena is also home to a number of religious buildings from colonial times, such as the magnificent Cathedral of Cartagena, also known as the Church of Santa Catalina de Alejandría; the Church of Santo Domingo, and the Convent of La Popa, that stands sentry on the highest hill overlooking the city.

Castillo San Felipe de Barajas
The Fortress dominates approaches to the city by land or sea
Cartagena
With the more modern district of Bocagrande in the distance outside the Old City walls
Simon Bolivar
He led Venezuela, Colombia, Panama (part of Colombia during this period), Ecuador, Peru to independence from the Spanish Empire
Cartagena Old City Wall
Built in the 16th Century and still an impressive reminder of days gone by