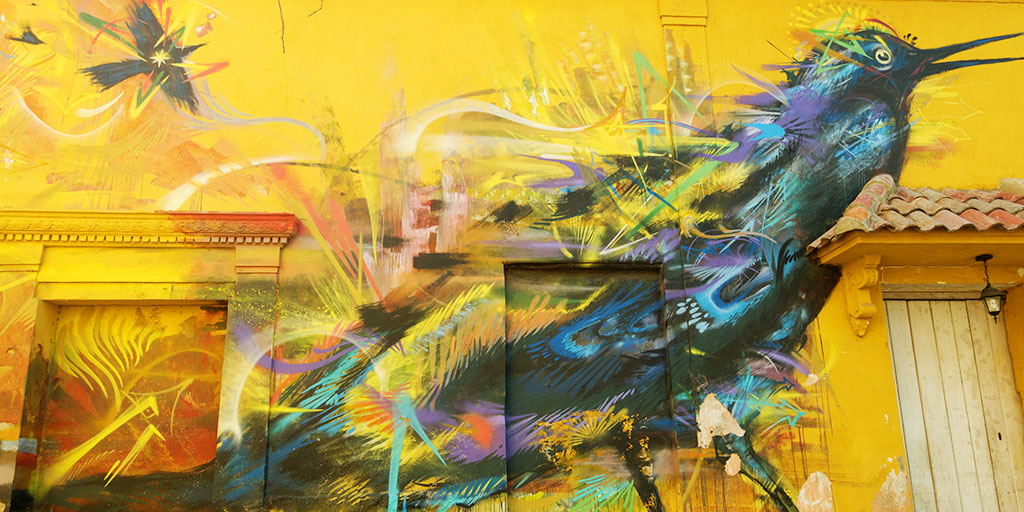 The Graffiti in Getsemani: An Art Scene Unlike Anywhere Else

The Getsemani neighborhood of Cartagena, Colombia has undergone a massive Cultural Renaissance over the course of the last decade. Historically this district was home to servants and the lower class of Cartagena. Now it is the artistic heart and soul of Cartagena which beckons artists and creative individuals from all over the world. One of the most striking (and obvious) attributes of this rebirth is the Getsemani Graffiti.

When you walk through this close knit community you’re greeted by vibrant depictions of Caribbean life splayed out on the crumbling stucco walls of authentic Spanish Colonial buildings. Almost every street is lined with Getsemani Graffiti with bright murals showcasing culturally significant images from the historic to the modern.

You’ll find tropical scenes, visual depictions of folk tales, traditional Colombian palenqueras (fruit sellers), and vignettes depicting the rise of the Afro/Caribbean Colombians who inherited Cartagena from the Spanish hundreds of years ago. Local artists use these street art installations to tell their stories in vibrant color and visitors come from all over the world.

The pull of this expressive art form has called to enthusiasts from all over the world. Artists from The UK, Finland, and elsewhere have come to experience and remix it in this unique melting pot. The graffiti in Getsemani has become so well-known internationally that in 2013 Getsemani played host to the International Urban Art Festival—a six-day-long event showcasing the best street artists from Cartagena and beyond.

Both the draw and the importance of the street art in Getsemani can be summed up by one astute observation made by Samilo Fidel Lopez, Director of Creativity Graffiti Vertigo—the organization which organized the festival:

“One of the advantages of Urban Art lies in turning a wall into a conversation space, in a moment of tolerance and recognition of the thought of another while at the same time it draws attention to issues relevant to the community.”

Where to Find the Best Graffiti in Getsemani

While almost every street features murals and paintings, Calle Sierpe has become a sort of Ground Zero for this artistic infestation. Tourists can stroll along this narrow way and gaze at some of the best street art on display anywhere in the world. Alternatively they can duck into almost any of the side streets and find hidden gems within this cultural jewel.

And international eyes have taken notice. The rebirth of the neighborhood (including the graffiti on Getsemani’s walls) has been retold on the hallowed pages of publications like Forbes and The New York Times. Cartagena has truly become a vacation destination for street art aficionados.

What Else Does Getsemani Offer?

When you need a little pick-me-up, Getsemani is also one of the best neighborhoods in Cartagena to grab a quick bite to eat. There are excellent restaurants, bars and bistro eateries on nearly every corner. Stay after the sun goes down and the dance clubs come alive with everything from Caribbean and Cuban music to hip-hop and Salsa.

When you stay at any of our luxury vacation rentals in Cartagena you’re within walking distance of all this excitement. Take advantage of our complimentary concierge service to reserve a spot at one of the best restaurants in Getsemani or arrange travel to and from the bustling nightclubs in the district. Day or night, Getsemani offers something eye-popping and spectacular for the adventurous visitor.